I Am The State

So we're one-third through testing now. The writing test is done and we've two glorious days of multiple choice before we call it a semester.
I wanted to post some music in homage to the season, kind of like I did last year, but I was dog tired and it never really occurred to me that day that I even have a blog (sorry, I think of you sometimes but dang, I couldn't even get to the bathroom). If I think about it tonight, I'll throw up some music and you can pretend it's postdated.
Mostly, our kids have a good attitude about testing. They want to do well but don't stress too much about it. I have, however, one group of kids that seems to be the perfect storm for silliness. They don't mean to talk all the time, but they must be constantly occupied or they will grab each other and make fart noises, they just can't help it.

So anything I tell the kids to do is followed by a threat of the State.

It all really worked. The threat of The State was enough to get everyone working and behaving. I like to imagine that my kids all pictured this guy behind a desk, waiting to catch them in wrongdoing... 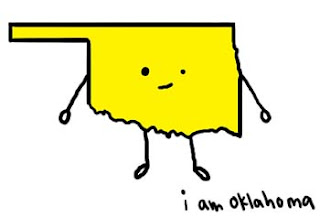 There's already something appallingly ugly hanging off his panhandle. It's called "Texas."

And look, the word verification has called me "crever!"