My First Trip To Jesus Camp Where Shorts Are Allowed 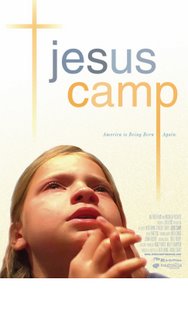 I landed tickets to the premiere of Jesus Camp Wednesday night. A look at their website shows no wide release date and that the night I saw the movie seemed to be its first round of premiers. Score one for the Bible Belt.

A growing number of evangelical Christians believe there is a revival underway
in America that requires Christian youth to assume leadership roles in
advocating the causes of their religious movement.

JESUS CAMP, directed
by Heidi Ewing and Rachel Grady (The Boys of Baraka), follows Levi, Rachael, and
Tory to Pastor Becky Fischer's "Kids on Fire" summer camp in Devil's Lake, North
Dakota, where kids as young as 6 years-old are taught to become dedicated
Christian soldiers in "God's army." The film follows these children at camp as
they hone their "prophetic gifts" and are schooled in how to "take back America
for Christ." The film is a first-ever look into an intense training ground that
recruits born-again Christian children to become an active part of America's
political future.

My own upbringing touched the very edges of such experiences. Although my church experience was not in the Pentecostal tradition, I spent four years attending a Christian school run by an Assembly of God church.

Twenty-plus years ago, conservative politics were a smaller part of evangelical doctrine. I remember a chapel service in school and talks in church about abortion. The only mention of homosexuality in those circles was a homophobic youth minister who used the word "fag" like it was written in Scripture (in a fascinating sidebar, his wife approached me after I spoke at Dad's funeral half jokingly asking me to speak at both of their funerals. I wonder if he'd want my memory mentioned?). We didn't chant"Pray for righteous judges!" or welcome cardboard cutouts of the President at our worship services like these young people do.

Still, Becky Fischer, the children's pastor profiled in Jesus Camp, maintains that she is not training kids for political action. Her aim is only to "...teach our kids what the Bible has to say about life and how we are supposed to respond to it as Christians.". She cites Scriptural backing for every political message she gives to her campers. I won't argue these specific points except to say that for every political message she finds in the Bible, I could find others that support care for the poor and social justice that would run afoul of her cardboard cutout worship icon. I suppose we all find politics in Scripture, we just choose to emphasize different passages.

What my upbringing did have in common with the "Jesus Campers" is the Born Again experience. Salvation is depicted as an all at once, emotional, easy experience that once and for all brings the forever clear presence of God.

In the half-full theatre, most of the movie goers responded to the film as though it was a comedy. How could this be real?

I couldn't laugh. I know that it's real. I've been to the edges of this content. I just found myself thoughtful and a bit sad. Fischer calls the kids at her camp a "key generation" to Christ's second coming. I remember when my generation had a similar title.

I remember too my generation growing up. With few exceptions, we all had some sort of faith crisis, a way that the simple answers we were given as children didn't cover our lives any longer. Some of my contemporaries gave up on faith when those questions went unanswered. I thought of my own faith crises--because despite the fact that my faith somehow generally outlives spiritual crisis, I still find myself wrestling with God.

So what happens when this "key generation of Jesus Campers" hit their crises and issues of faith are no longer simple? I take that question from the film more than any other image or quote. It makes me hope for reasonable, nuanced faith to flourish.

I've been looking forward to seeing this for a while. It doesn't come out in Chicago for another week, sadly. At least we've got This Film Is Not Yet Rated already.

I am pretty sure that my excitment to see this film was as much about getting SOME FILM ahead of so many other major markets as about the subject itself.

It's just nice to know what that feels like for once.

I've only seen the clip on ABC, but what I fear, is that when these children come down from this emotional high and reality sets in they'll be turned off to Christ for the rest of their lives.

So I did get my review in the MidCity Advocate - I'll post here or on my blog tomorrow...