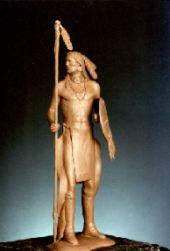 I am not one of those people who hates everything about Oklahoma because it is Oklahoma. I pride myself on that. I like it here. Sometimes I even love it and I choose to stay. I like to use the statue at the top of the Capitol dome as a symbol of my "stay put" feelings.

Read what Senator Enoch Kelly Haney says about his work that now sits atop the dome.

"He is standing his ground. He refuses to be moved. He will continue to stand for those things he believes in such as family and other values Oklahomans hold dear. He stands strong in the face of adversity, as Oklahomans have. The people of this state have withstood so much: The Dust Bowl in the 1930s, and more recently the Oklahoma City bombing and the May 1999 tornadoes. Still, they maintain their dignity and determination. That is what Oklahoma is about."

(wipes away a tear) Did you hear that?! That warrior stays! His spear sticks his clothing to the ground and he is here!! That warrior doesn't come off the dome because we don't have an art house theatre, he goes to the art museum and sends his friends so that demand is greater and progress can happen! He shops local businesses! He knows he belongs to the land!!!

So imagine the state of my head when I spend the afternoon with my mentor from college. We talk about our concerns about OBU, he tells me how his Baptist school seems to be getting it right. This goes on for a couple of topics. Church, Mexican food, local art.

And then, dammit, there's theatre. I blog too much about this already. Sometimes I miss it. Lots of great and wonderful things have taken its place. My friends do a bit to replace the tight community that happens when you do a show. My work at school goes a long way to replace that feeling of giving a child a dream. This silly blog even does a bit to scratch the itch of performance, creativity and (I sigh as I admit this) attention. So most of the time the itch stays away, but a great production or a visit with just the right friend brings it back. When the itch comes back, it usually manages to bring some guilt along--am I wasting something I should be using?

Don reminded me of the right-out-of-college dream that got swept under the rug in the name of student loans, caring for my parents, and those damn kids that I end up loving, The Second City Training Center. So here's what I've started thinking: Second City Training Center isn't going away. In fact, I have found an intermediate step of sorts. Look! Look! Second City does a sort of teacher nerd camp! You know how I love nerd camps. So it's on. I get one other teacher to go with me for a week. We take the class (which is cheap), stay a coupla extra days, and I start to kill this itch. Scratching it doesn't mean I uproot everything in my life, scratching it doesn't mean I give over to it 24 hours a day again, it just means I have an itch.

You could never survive in Chicago. You don't have the big city attitude. You'd sink fast.

That sounds like a gauntlet being thrown down, Anonymous.

Does the big city attitude include being critical whilst hiding behind anonymity? Because you're right, I don't suffer that gladly.

Wait, wait... You're showing that native American WITHOUT irony?

Did your senator somehow fail to mention that those 'warriors' who 'stood their ground' were...um...killed?

You might address that question to Former Senator Haney himself. He is running for Chief of the Seminole nation.

They know you not, Educat.

Internet folk, the Educat could headline a seminar in irony training.