One of The Masses Of Pissed Off Former Beanie Wearers*

I am recovering from a nasty case of strep and had sworn off blogging for a time. See, when you see nothing but four walls, a television and the internets, it's easy to hear an imagined crowd in your ears cheering you on to some dumb blogging and well, dumb blogging is just dumb. More on this later, I think.

So what pulled me out? News is that my alma mater fired an employee for writing an editorial for a local paper. Read the whole story and see the sad changes in Oklahoma Baptist University. It's all so ironic to me as OBU was a major player on my road to critical thinking. It was there I learned a different perspective on Scripture, and broadened my focus in ways I never thought I would.

So now they fire someone for asking a question that I think the church should be asking. What happens to the people that we leave when church moves out into the cushy part of town? I asked the same question about a year ago here and still do as I see churches all over OKC continue their mad dash to the edges. It's a good question and the kind of question I thought OBU had taught me to ask. Guess not.

I haven't recommended a student to OBU in a long time. It hasn't been a conscious thing, but I have felt for some time that the experience I had there is over. My student loans are paid off, the era has ended. I will have to find other places to love handbells and men's choruses. I am, however, still open to the "Cranking Out Cynics Since 1910" t shirts, we just might have to put an end date after 1910 now.

*For non OBU alums, a green and gold beanie is issued to all freshman during Welcome Week. They are worn at all times at the first of the year (the time spent in a beanie has grown shorter and shorter over the years as the University has grown afraid of hazing). The campus is chock-a-block full of such traditions that are moving when you by in to them and goofy when you don't. For the record, I bought in.
Posted by educat at 3/24/2005 11:16:00 PM

Sad when someone gets into trouble for expressing an opinion. That's why I prefer the relative anonymity of my blog.

It affords me the freedom to (mostly) speak my mind without retaliation from Dr. Evil and his Gang.... 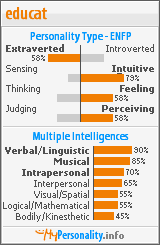